While raising money for men’s health is a focus for the team, a major motivator for growing the mos was to get people in rural communities talking. 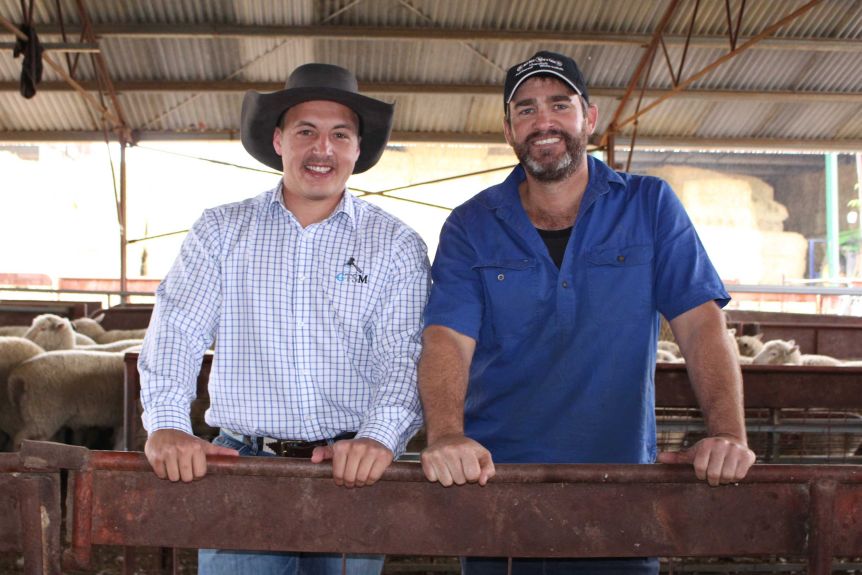 The best ideas are often dreamt up around the kitchen table and that’s exactly where the Stud Mos team in this year’s Movember campaign was born.

In a bid to take farmers’ minds off the ongoing drought, livestock auctioneer Lincoln McKinlay from Wodonga in Victoria and stud stock marketing team Struan and Monika Pearce from Millthorpe, New South Wales, came up with the idea of Stud Mos. “One night we were sitting around have a few red wines and speaking about how we could support the rural people in the industry who are going through a hard time with the seasonal conditions,” Mr McKinlay said.

“We all also knew people that had cancer in recent times.”

Stud Mos is one of the 13,804 Australian teams — and among the more than 49,000 teams around the world — raising money for the international Movember campaign this year. Since the movement began in 2003, it has raised more than $1 billion for men’s health, including $29 million in 2018.

The money goes toward raising awareness about men’s health and investing in initiatives for medical issues including prostate cancer, testicular cancer, mental health and suicide prevention.

Mr McKinlay said getting a team together for Movember was the perfect fit as it enabled them to bring together rural people from right across the country while also raising money to support men’s health.

“Once we put the call out for the campaign to our contacts, we had an influx of people showing their support and we now have 78 people … growing mos.”

Mr McKinlay said those men taking part came from every state, while women and babies were getting involved too by sporting “faux mos” for the Stud Mos cause. The campaign has so far raised $18,400 from donations with the team hoping to hit $50,000. 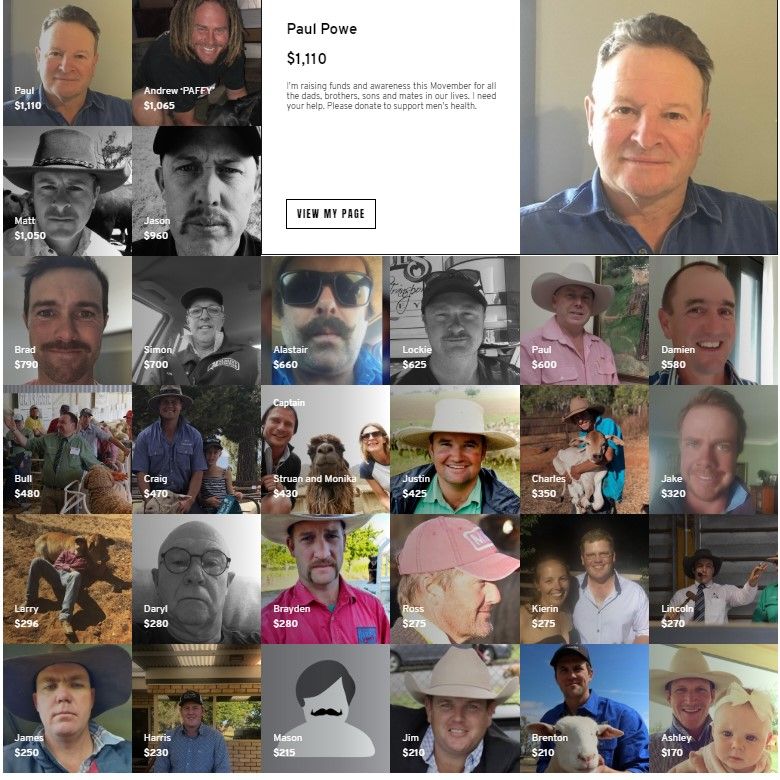 There are 78 men, women and children involved in the Stud Mos team raising money for the Movember men’s health awareness campaign

To meet that target the Stud Mos team is holding an online Movember charity auction with items donated by each participant.

The mixed catalogue of items range from a shaving kit — fitting for the cause — through to a Poll Hereford bull, a Corriedale ram, a kelpie pup, bales of hay, holidays, stud stock photography, wine, ram semen, bull semen, ewe pregnancy scanning services and a livestock drench.

“I think with the support we are getting at the moment we should be able to walk the $50,000 in,” Mr McKinlay said.
Mos get men talking
While raising money for men’s health is a focus for the team, a major motivator for growing the mos was to get people in rural communities talking.

Both Monika and Struan Pearce said it was important for men to talk more during tough times.

“As is the case with a lot of men in the rural industry, and men in general, they don’t always talk. So I guess if this can be a platform and a bit of a nudge to get people talking then all the better,” Mr Pearce said.

There are 78 men, women and children involved in the Stud Mos team raising money for the Movember men’s health awareness campaign

Participants have been keeping each other in the ‘mo’ with their progress through the Stud Mos Facebook group.

“We want to try and keep it as lighthearted as we can during such a trying season, and maybe we just might help someone by creating that contact,” Mr McKinlay said. While he’s keen to support the Movember cause, Mr McKinlay admitted growing a mo was not easy as he was “follicly challenged”.

“To be honest there is going to be a lot of urea needed and some good Instagram filters applied to make my sparse mo more prominent, and I even had a few weeks’ start on everyone else,” he said.
“I always dreamt of having a handlebar moustache but have quickly realised that’s not going to happen for me, so I won’t be keeping it after Movember.”

Looking out for others

Sheep producer, Scott Mitchell, from Rene stud at Culcairn in southern New South Wales, is a keen participant and is already sporting an impressive full beard and mo.

“I jumped on board with Stud Mos straightaway as I have a history of cancer in my family,” Mr Mitchell said.

And while the season had not been too bad at his property, he was keen to show his support to others in the rural community.

“I have many friends within the livestock stud game and we might be competing with each other when we are at shows but we are all friends. We all look out for each other,” Mr Mitchell said.

“There are a lot of people doing it pretty hard and pretty tough with the drought, so this is a way to raise a bit of awareness and have a bit of fun with it too.

“We are keeping in touch with each other via the Facebook chat group and we are also meeting a lot of people along the way, and it’s really lifting people’s spirits by having a bit of a laugh and a chat.”

While Mr Mitchell was more “follicly blessed” than Mr McKinlay, he said he had no plans to keep his mo after this month.

“I’ve never grown any facial hair for longer than three days, and I’ve been crutching sheep in the heat in the past week and the flies are getting stuck in it and it’s annoying the hell out me,” Mr Mitchell said.

“But a month of this is all I have to put up with. A lot of people have endured a lot of drought and heartache for years.
“Hopefully we can raise a fair bit of money along with awareness and try and change a few people’s lives,” he said.